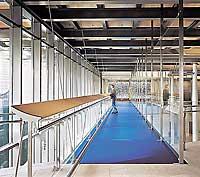 CHICAGO — Reginald Robinson first heard ragtime during a school assembly when he was 13. He pestered his mother for a piano, and soon was trying to replicate the sound on a tiny Casio keyboard.

"A lot of people say, 'You should leave that ragtime alone — go and play some jazz,' " said Robinson, now a 31-year-old ragtime composer, researcher and performer. "My heart is in ragtime. I love this music. I think it's forgotten, and it's really a dying art."

The self-taught Chicago pianist's effort to keep the uniquely American music style alive earned him one of this year's 23 MacArthur Foundation "genius grants," $500,000 awards that the recipients can use however they wish. For Robinson, the grant will mean less time worrying about how to pay the bills and more time touring.

Other grant recipients announced yesterday by the Chicago-based John D. and Catherine T. MacArthur Foundation include a high-school debate coach, a Pulitzer Prize-winning novelist and a glass expert whose work is featured in Seattle's City Hall.

When Rueben Martinez, another MacArthur Foundation recipient, was a child, he lived in a town without a public library, and his parents didn't read to him.

But his teachers inspired a love of literature, and when Martinez became a barber in the Los Angeles area, he started selling books in his shop. Now, his Santa Ana, Calif., bookstore — Libreria Martinez Books and Art Gallery — is among the largest commercial sellers of Spanish-language books in the country.

"I made more money cutting hair than selling books," said Martinez, 64. "But the joy of my life is what I'm doing now."

James Carpenter, 55, of New York, was recognized for his work expanding the artistic and technical potential of glass. He helped design a partially transparent exterior for the new Seven World Trade Center, to replace a smaller building that collapsed after the twin towers.

Carpenter also designed one of the centerpieces of Seattle's City Hall, "Blue Glass Passage." The work, which is crafted out of high-tech laminated blue glass and is meant to evoke images of the sea, is a bridge suspended over the building's lobby.

Katherine Gottlieb, 52, Anchorage, Alaska. The president of Southcentral Foundation has improved health care in her Native Alaskan community by changing the focus to patient-centered health care.

John Kamm, 53, San Francisco. The executive director of the Dui Hua Foundation has won the release of or improved conditions for hundreds of political prisoners in China.

Maria Mavroudi, 37, Berkeley, Calif. The professor at the University of California, Berkeley, studies the history of shared knowledge between medieval Byzantium and its neighbors in the Islamic Middle East.

Cheryl Rogowski, 43, Pine Island, N.Y. Rogowski overhauled her family farm, which specialized in a single crop, to provide a variety of products for regional and specialty markets. She has also mentored immigrant farmers and worked on literacy programs for migrant farm workers.

Amy Smith, 41, Cambridge, Mass. The inventor and mechanical engineer specializes in labor-saving technologies and life-improving solutions in developing countries. She teaches at the Massachusetts Institute of Technology.