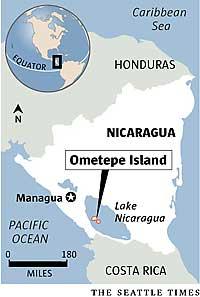 There may be direct flights between Seattle and certain Latin American locales, but Ometepe most certainly is not one of them. This is an island without hot water, much less an airport.

Set aside two days to get there: one for flying to Managua, Nicaragua's capital, and the other to navigate a series of taxis, buses and ferries to Ometepe. A taxi from the Managua airport to the Huembes bus terminal (it's a little dicey; ask your driver to take you directly to the San Jorge express bus stall) costs about $15, and the express bus from Huembes to the town of San Jorge will run you around $2.

The bus will drop you off at the San Jorge ferry dock, where you'll catch a boat to Moyogalpa, Ometepe's chief port. The ferry ride lasts an hour and costs a little more than $1. Ometepe-bound ferries also depart from the historic colonial city of Granada, though sailings are less frequent and drop off passengers at the island's other main city, Altagracia.

On Ometepe, unless you're part of an organized tour or rent your own vehicle, plan to hop the same fleet of castoff U.S. school buses used by the island's residents. You can generally get from one side of the island to the other for less than $4.

Outside the two cities, buses pass through most villages and towns only a few times a day — even more rarely on Sundays. Times may vary from printed schedules, so be sure to double-check with locals the night before you plan to catch a bus.

Check with your doctor or the University of Washington's travel medicine clinic (206-685-1060; www.hallhealthcenter.com) to get up to date on vaccinations and anti-malaria pills. You'll want to bring along a hat, mosquito net and plenty of insect repellent.

Beyond word of mouth, communication is rather sparse on Ometepe, with few public phones or Internet access outside the cities of Moyogalpa or Altagracia. The beach resorts allow you to use their phones for a fee.

Since Ometepe is an off-the-beaten-path destination, your best bet for advance preparations may be to consult budget-travel books such as Lonely Planet and Moon Handbooks, both of which have sections on Ometepe in their Nicaragua editions.

Once you get to Nicaragua, the clout of the U.S. dollar translates to relatively cheap travels. That's especially true on rural Ometepe Island, where accommodations range from $2 hammocks to $45 private cabins and a satisfying meal can be had for well under $5.