Castillo and other members of his farming cooperative receive among the highest prices in the coffee industry — $1.61 a pound — for the beans they grow under towering trees on the volcano slopes of Ometepe Island.

But don't look for a Fair Trade Certified label on the packages that carry Castillo's coffee. That coveted stamp of approval costs money — farmers and roasters pay for the label — and would shave hundreds of dollars from his co-op's annual earnings.

The co-op's coffee, sold in the U.S. by a Bainbridge Island nonprofit, is marketed as "fair-traded." It's a semantic difference that highlights a growing debate within the specialty-coffee industry about workers' wages and their quality of life.

Booming U.S. demand for Fair Trade coffee has triggered an industrywide tiff about what exactly "fair" means when it comes to paying farmers.

Oakland, Calif.-based TransFair USA labels Fair Trade coffee after certifying that it was grown by small-scale farm co-ops that were paid a fair price — at least $1.26 a pound — for their beans.

Other growers and sellers are finding ways to call attention to their sustainably grown coffees, which they say also provide a decent living for farmers. Fair Trade label or no, they say, their coffee is sustainably grown, or farmed in a way that respects the environment and is fair to workers.

"To say that everything else that we're doing is not good, and what they're doing is good — it's been a big struggle for us," said Pete Rogers, green-coffee buyer for JBR Gourmet Foods in San Leandro, Calif.

JBR often pays more than Fair Trade prices for its coffee, Rogers said, and it sponsors dozens of community-development programs in countries such as Mexico and Zambia.

"What they [TransFair USA] have done is a great job of selling the public on the idea," said Seattle's Best Coffee founder Jim Stewart, who sold his stake in Seattle's Best but still owns an organic coffee farm in Costa Rica. "It's kind of an easy way out. You see that stamp and you say, 'Ha.' "

A buffer against price fluctuations

Volatile swings in the global coffee supply have slashed wages for thousands of farmers and workers in recent years.

Unroasted coffee beans that sold for nearly $2 a pound wholesale in 1997 dipped to under 50 cents a pound in 2002 — a price below many farmers' production costs, which generally average 60 cents to 90 cents a pound in Central America. Prices now hover between 70 and 80 cents a pound.

Fair Trade Certified coffee spares farmers from the ups and downs of commodities markets by establishing a minimum price for their product — currently $1.26 a pound for arabica beans, the type preferred by specialty roasters. Independent monitors confirm that farms receive the Fair Trade price.

Dunkin' Donuts recently introduced a line of Fair Trade espresso drinks, and even canned-coffee giant Procter & Gamble, maker of Folgers, has developed a Fair Trade blend under its Millstone label.

Other retailers have taken the concept much further — a Fair Trade-only coffee company called Equal Exchange has become increasingly popular with church groups around the country, and Caffe Ladro, a seven-store independent chain in Seattle, serves "triple-certified" coffee that is Fair Trade, organic and shade-grown. Retail prices vary, but Fair Trade, organic and shade-grown coffees are generally a bit more expensive than standard specialty coffees — a few cents more for espresso drinks and about $1 more for a 1-pound bag.

Buying coffee stamped with the Fair Trade label "is a relatively effortless way for people to make a difference in the world," Rice said.

Fair Trade has its detractors

TransFair's model requires Fair Trade farms to be part of a democratically run co-op, a rule that has riled owners of larger farms and estates who complain that they're shut out from the Fair Trade system even though they treat their workers well and pay them fairly.

Meanwhile, several smaller U.S. roasters who had sold 100 percent Fair Trade coffee broke their alliance with TransFair earlier this year, contending that TransFair has become too cozy with coffee corporations such as Starbucks and Dunkin' Donuts, whose Fair Trade offerings amount to a small fraction of their total coffee supply.

Even some who are eligible for Fair Trade status say they don't see why they should pay TransFair's certification fee, which until recently had been 10 cents a pound, to simply rubber-stamp what they already know to be fair and ethical business practices.

That's the stance of the Bainbridge-Ometepe Sister Island Association, which pays $1.61 a pound for the coffee grown by Castillo's co-op on Ometepe Island and sells it to Seattle-area retailers. All the coffee's profits pay for community-improvement projects on the Nicaraguan island.

"Ten cents a pound, when we do 14,000 pounds a year, is a lot of money that can go back to Ometepe," said Lee Robinson, the association's treasurer.

Rice says TransFair has reduced its certification fee schedule to as low as 5 cents a pound. He says he understands why a sister-island association based on direct personal interaction would find it unnecessary to pay for third-party certification.

But on a larger scale, he said, the Fair Trade label provides skeptical consumers with verification that companies are paying fair prices to growers.

Other programs are beneficial, too

Starbucks, which says Fair Trade coffee accounts for about 1 percent of the coffee it buys, started an incentive system three years ago that paid premiums of up to 10 cents a pound to growers who met certain social and environmental criteria, such as paying at least minimum wage and treating and recycling the water used to wash beans. Starbucks says it paid an average of $1.20 a pound for the unroasted coffee it bought last year.

JBR Gourmet Foods, whose signature product is its 3-pound bags of San Francisco Bay French Roast sold at Costco stores, says it pays at least $1.38 a pound at 18 coffee farms around the world. It also pays for community projects, which have included schools, medical clinics and a baseball field.

While his company makes three Fair Trade blends under its Organic Coffee Co. brand, JBR's Rogers said the Fair Trade logo can leave consumers with a misguided perception that any other coffee isn't sustainably grown.

"We really believe we're making more of a direct impact with what we do," Rogers said.

Stewart, who founded Seattle's Best Coffee but no longer works for the Starbucks-owned company, said TransFair's set prices can reduce the incentive for farmers and workers to produce a high-quality crop.

Instead, Stewart said he prefers to encourage workers to pick ripe beans by offering perks based on a full season's harvest. During Stewart's tenure at Seattle's Best, the company earmarked profits from each year's crop for projects such as schools and water pumps. He and his wife, farm owner Luz Marina Trujillo, still deliver new school uniforms each year to the families who work at their farms in Costa Rica.

The incentive-based approach, Stewart said, tells workers that "because you've done such a good job, your coffee has more international value, and here's some of that value for you to use in your community."

Rice said that while community projects sponsored by individual coffee companies are commendable and well-intentioned, they also can be seen as a form of paternalism.

"We just believe there's a more sustainable model that empowers farmers to help themselves," Rice said.

Global demand for Fair Trade coffee is still relatively low — Fair Trade coffee accounts for perhaps 5 percent of specialty-coffee sales in the U.S. — but that demand is growing. Rice said Fair Trade farmers have plenty of incentive to strive for top quality. If they don't pay attention to quality, he said, their coffee won't sell.

With demand rising for Fair Trade and other eco- and worker-friendly coffees, caffeinated consumers are wading through what can be a confusing array of labels. Shoppers perusing the 12-ounce bags at their favorite espresso bar or grocery store often must choose between organic or shade-grown, or Fair Trade versus fair-traded.

Rogers suggests that the U.S. government take up the issue of Fair Trade coffee, similar to how the U.S. Department of Agriculture recently introduced a "USDA Organic" logo.

"There's all these myriads of certifications out there that confuse the consumer," Rogers said. "If the government were willing to get involved with Fair Trade, I think that would be a very positive step for the consumer."

Castillo: "We have a better life"

The Carlos Díaz Cajina Cooperative on Ometepe Island isn't part of the Fair Trade program. But with the co-op's coffee selling for $1.61 a pound, its farmers say they feel fairly compensated. During the Sandinista era in the 1980s, they received less than 20 cents a pound.

"We have a better life," Castillo, 66, said through an interpreter. "Before, selling coffee at that price, I didn't have the money to survive. I didn't have money for the food I needed, for clothes."

Coffee profits have brought a water system to his village and helped him pay school fees for his six sons and three daughters, he said.

"Maybe it's not that our houses are nicer and we live like rich people, but now I can do things like send my kids to school," Castillo said. "Now, I'm not just subsisting. I can live more comfortably." 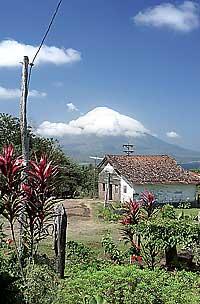 The Carlos Daz Cajina coffee co-op on Ometepe Island enables farmers to enjoy a standard of living beyond day-to-day subsistence.

In one of four newly built Ometepe Island classrooms paid for with coffee profits, first-graders in Balge join their teacher in song and dance to loosen up on the first day of a new school year. (BETTY UDESEN / THE SEATTLE TIMES)

Jim Stewart and his wife, Luz Marina Trujillo, far left, distribute school clothes and classroom supplies to the children of workers at Trujillo's Santa Elena farm. Trujillo said that, as a child in Colombia, "I used to play with coffee instead of dolls." Her farm sells beans to Seattle's Best Coffee.

The Lomas al Rio mill in Costa Rica was the first to sell certified organic beans like these to Starbucks. The 136 growers who supply the mill have agreed not to use synthetic fertilizers or pesticides.