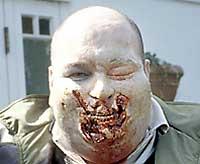 "If 'Dawn of the Dead' is 'Hamlet,' " says director/co-writer Edgar Wright, "then our movie is 'Rosencrantz and Guildenstern are Undead.' "

It's as good a description as any for "Shaun of the Dead," the zombie/romantic-comedy spoof from Great Britain, opening in Seattle theaters Friday. In the film, appliance-store clerk Shaun awakes one morning for another day in his dull life, only to find that zombies have taken over London. What to do?

Wright and actor/co-writer Simon Pegg (who plays the hapless Shaun) visited Seattle last month to chat about their film — and about the inevitable sequel rumors.

The birth of "Shaun"

Wright: "Spaced," our television show, was on Bravo briefly, but never really shown properly [in the U.S.]. It was a sitcom that Simon wrote and I directed. A sensibility like "Friends" on crack.

Wright: It was essentially a flat-sharing [story], people sharing an apartment, with flights of fancy, references to pop culture, fantasy sequences that would either be sort of hyper-real or dream sequences. It kind of inspired us to make films.

Pegg: We actually did do a scene in "Spaced" where I was fighting zombies, in a video game. We got to the end of it and thought, wow, wouldn't that be fun to do that as a film. We're both big fans of the [zombie] genre, and we just managed to somehow get our own TV show going, so we thought, why shouldn't we make a film? Sort of blind arrogance.

Wright: We thought, wouldn't it be great to do this for real? Not a sitcom, so we don't have to return to the status quo at the end of the episode. We can kill everybody off if we want to. In TV, even if you have a comedy/drama with some progression to it, you always have the theme of having to return everything back to normal in the end.

"Dawn of the Dead" tribute

Wright: We definitely wanted to design it so that people who are fans of the original film will get a kick out of it, but even if you haven't seen any zombie films before, you should enjoy it.

Pegg: The whole film, the whole nature of the zombies, is obviously a direct reference. Some little things, [such as] the mother is called Barbara and Barbara is the main character in "Night of the Living Dead," the first one.

Wright: The most famous line from that film is Barbara's brother saying, in a spooky way, "They're coming to get you, Barbara."

Pegg: So we have Ed [Shaun's flatmate] saying it. That's a slightly more buried one. But the place where [Shaun] works is called Foree Electronics, and the main actor in the original "Dawn of the Dead" was Ken Foree. Little things like that.

Wright: We sort of designed the film in the hopes that people would watch it more than once. There are quite a lot of "Where's Waldo?" things going on in the background.

Wright: We had about 1,100 zombie extras. There was, like, a core of 40 zombies — proper actors, stuntmen, circus performers, dancers, amputee stuntmen, different kind of professionals. And for the rest of them, we put out a call to arms on the Internet. We basically said, "Has it ever been your dream to be a zombie in a film? This is your chance."

Pegg: Generally, if you're an extra, you're background scenery, you're fleshing out a scene. Whereas, if you're a zombie, at least you can stagger around and be acting in a way. It's more fulfilling. Such a great response. The worst thing is an underpopulated zombie film.

Wright: I made a tape called "Everything You Wanted to Know about Being a Zombie But Were Afraid to Ask." We had a movement choreographer who worked with us for the auditions. We had open auditions, spooky music, people had to walk a bit toward the camera. Someone said to me, how bad do you have to be to fail that audition?

Pegg: We were using George Romero's model of the kind of shambolic, staggering dead person, we wanted that to be really consistent throughout every scene. Our choreographer did a brilliant job. But there's one scene ...

Wright: You always see one zombie in the background who's not so good. On one shot, I remember, the producer said, "There's a guy in the back who's doing it wrong." I said, "Oh, I don't see anything." Now I see it, there's one guy who does it wrong.

Pegg: [When filming the crowd scenes], we had a truly spectacular number of zombies on set. For sound reasons, whenever there was dialogue, they all had to be quiet.

Wright: The zombies would not be able to stop doing it. The [assistant director] would go, "OK, no moaning on this take," then as soon as "action," there'd be an "ooooh." It was just an instinctive thing, they couldn't help it.

Wright: [My first feature] was something I did straight out of college with my school friends. It was a no-budget Western set in my area of England, the west country, which looks absolutely nothing like the Wild West. Sort of a silly, naive version of ripping off the Zucker brothers and Mel Brooks. I find it difficult to watch now.

I felt really bad the other day. We met Quentin Tarantino, and he really liked "Shaun of the Dead," and he said, "It's the best first film I've ever seen. Yeah!" I was trying to find a point to say it's not my first film. Can we say it's my first good film?

Pegg: I wrote a treatment for a sequel, as a joke. But because of the way the film ends up, it would involve certain characters being in certain states, which might not best use their talents.

Wright: The continuing adventures of Shaun and Ed might be a bit like a Clint Eastwood film "Every Which Way But Dead." We can start a rumor here, that's going to be the sequel. You heard it here first.