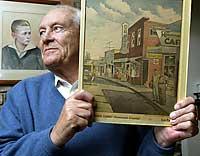 Jim Mitchell holds up a preserved page from the May 8, 1960, Seattle Times featuring artwork by Parker McAllister that Mitchell used for the cover of his book on Lake Stevens. The longtime home of Mitchell's Pharmacy is in the center. (KEN LAMBERT / THE SEATTLE TIMES)
By Peyton Whitely
Times Snohomish County Bureau

The cover of Jim Mitchell's self-published book on Lake Stevens depicts a downtown scene from 1960 that no longer exists.

That's appropriate because much of his book, "Lake Stevens — My Town: Recollections of a Native Son," describes a bygone era when the lake was a popular tourist attraction and parents allowed their children to roam without worry.

Though the book is a history of the community, it also provides the insights of Mitchell, who at 80 has been witness to much of Lake Stevens' history and development.

For anyone interested in why Snohomish County is the way it is, the 118-page publication provides observations that range from memories of kids in a boyhood gang — a word that had a different connotation generations ago — to descriptions of how local highways and fire departments came to be.

Mitchell says he never expected the book to be as successful as it has become, going from an initial printing of 300 copies to its current sales of about 1,000. The book sells for $19.95, and a portion of the proceeds is donated to the Lake Stevens Historical Society.

"It's been very humbling," Mitchell said recently. "I didn't dream this would happen."

Yet if anyone was going to produce such a history, it probably would have to be Mitchell. His father, Ben Mitchell, in 1920 bought the pharmacy that would become the center of the community's social and cultural life.

In an introduction to the book, Ann Whitsell, a past president of the historical society, notes that there's possibly "no current resident of Lake Stevens more qualified to write a book about this community and his experiences as a lifelong resident than Jim Mitchell."

Mitchell starts his book with a memory from May 1933, when he and friend John Cockburn built a treehouse they called the Eagle's Nest. From it, they could see the lake and the Cascades, including Mount Rainier.

"As I sat in my Eagle's Nest watching the world go by and counting my blessings, I realized something. I was one of the luckiest kids in the entire world," Mitchell writes.

Other sections detail 50 years when Lake Stevens was "the playground of the Pacific Northwest," supporting eight lakeside resorts. Lundeen Park, now a county park, "became one of the largest and most popular recreational resorts in the Northwest" and drew 7,500 people to Weyerhaeuser picnics, Mitchell writes.

Besides those upbeat tales, however, is another view of the community and some fundamental questions about how it has changed.

The core of the community was once the Rucker Bros. Mill, which burned in 1925, changing the community's character and bringing high unemployment.

"In fact, if my memory is correct, only one new house was built in Lake Stevens between 1935 and 1945. Ten years, no change," Mitchell writes. "There were more businesses in downtown Lake Stevens in the 1920s than there are today."

All of the buildings in the book-cover painting are gone, Mitchell notes.

Further setbacks followed the mill fire, Mitchell adds. Highway 9 was developed about 1960 to provide an alternative to Highway 99. That led to the development of the Frontier Village shopping area, siphoning business from downtown.

"The final blow was the construction of Highway 92 [in 1960], which replaced the Vernon Road as the main road to Everett. ... Highway 92 bypassed Lake Stevens, and downtown quickly became a ghost town," Mitchell writes.

In 1960, Mitchell's Pharmacy moved to Frontier Village "in an effort to survive," Mitchell says. Downtown was incorporated then, which Mitchell believes was a mistake.

"It is too bad that incorporation passed in 1960, because I really believe that if we had delayed the formation of a new city, Frontier Village and downtown Lake Stevens would be a unified community today," he writes.

Other sections of the book detail the histories of schools and local Scouting, the first town marshal and small-town pranks.

Today, the community still is grappling with many of the issues that Mitchell describes from decades ago, such as looking for a way to revitalize downtown.

"If I were to have the opportunity to live my childhood over again, I wouldn't change a thing. I would come back to Lake Stevens and do it all over again," he writes.