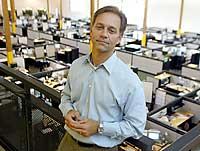 Jeff Seely is CEO and chairman of ShareBuilder, which has had an increase in sales of 40 to 50 percent each year since it was launched in 1999. (GREG GILBERT / THE SEATTLE TIMES)
By Tricia Duryee
Seattle Times Eastside business reporter
For two-plus years, Barclay Albright has socked away money in the stock market that he normally blew on fast-food and nights out.

Last year, his sacrifices of about $200 a month paid off when he sold his Home Depot stock to make a down payment on his Beaverton, Ore., home.

"I would spend the money if it was in my bank account," said Albright, "but now ... on the second Tuesday of each month, (ShareBuilder) pulls a specific amount and automatically invests it. I've found I haven't lost any luxuries."

The 31-year-old environmental chemist is the typical client of ShareBuilder, a brokerage that allows customers to buy and sell stock online.

Founded in 1996, the company started out like other first-generation Internet ventures that struggled to figure out how to make money. After reinventing itself more than six years ago, it seems to have found a formula that works, enabling it to join Seattle's community of surviving dot-coms.

The Bellevue company's sweet spot: targeting young, first-time investors, who have only a small amount to put away each month. There are no minimums to get started and investments are executed for $4 or less in fees.

"We are absolutely targeting middle America," said Jeff Seely, ShareBuilder's chairman and chief executive. "That's the lower end of the market for everyone else, but we think it will be a big group."

Half of all new ShareBuilder customers have never had a brokerage account. The average customer is 35 years old; about 40 percent of customers are women. Average household income is $65,000, with each customer investing $350 to $400 a month. The average account size is $5,000, far less than the industry's average of $189,000, according to Ellen Guion, senior research manager of financial services at J.D. Power and Associates.

Rather than charging these customers $40 or more a trade, ShareBuilder creates a revenue stream by encouraging automatic investment plans.

It's able to charge less per trade largely because the company doesn't execute them in real-time. Instead it compiles customer orders for trades, spreading the costs among multiple accounts. Real-time trades cost customers more.

ShareBuilder reached a milestone this year when it exceeded 1 million accounts. It attracts customers either by advertising or developing partnerships with more than 40 banks and 140 credit unions and various other nonfinancial institutions.

The effect has been steady revenue growth, with sales increasing 40 to 50 percent each year since ShareBuilder launched in 1999. Although it won't disclose financial results because it is a private company, it says it is profitable.

Guion said ShareBuilder is outside J.D. Power's microscope because it offers services different than traditional online brokerages. But the number of households participating in its surveys are increasingly checking the "other" box and filling in ShareBuilder's name, she said. (ShareBuilder will be mentioned in J.D. Power's annual online-investing report due out next week, but will not be reviewed as extensively as the top 11 companies.)

Signs of success are visible beyond the numbers. In October, the 120-employee company moved to office space in Bellevue that Teledesic, a company started by Craig McCaw, occupied before fizzling out.

The building's vaulted ceilings are left over from its days as a Safeway distribution center. A conference room suspended in air hovers over the employees below. Cubicle rows are named for famous investors like Warren Buffett, chairman of Berkshire Hathaway, and Benjamin Graham, who conceptualized value investing, or choosing underpriced stocks.

There's a sense of ease, as if everything is under control. No one rushes from one desk to the next. On a recent day, Seely pulls up to the office in his black Chevrolet classic convertible — top down, red interior showing. Employees hang out in the break room, a former Tully's cafe. An exercise gym is staffed with a part-time instructor, and a nutritionist organizes the appropriately named HealthBuilder program.

The casual atmosphere "tends to come when you become more successful," said Paul Goodrich, who serves on ShareBuilder's board as managing director of Madrona Venture Group, which invested four years ago.

"As you achieve a cash-flow positive position, you don't lay down your burden and rest, but it gives you the confidence to keep doing what you've done to continue to be in business," he said. "For a startup company that's a question mark in the early days."

The company has come a long way to achieving Zen status. Starting out only a year after Amazon and eBay, ShareBuilder is a first-generation dot-com of sorts that's still around in a major way.

First called Netstock Direct, the company provided customers financial information and allowed them to buy stock directly from a company, rather than through a broker. That part of the company still exists, but accounts for a small amount of revenue.

When Seely came on board in 1998, his idea was to add the brokerage side of the business.

In all, the company has raised more than $67 million in venture capital from investors that include Wells Fargo (also a ShareBuilder partner), Washington Mutual, Madrona and others.

The company hasn't been immune to economic swings of the past few years. In 2001, for instance, it laid off 20 percent of its staff. But Seely said that had more to do with shedding software developers they didn't need after completing ShareBuilder technology.

What differentiates the company from others — including online giants E*Trade or Ameritrade — is that it offers dollar-based investing. This means customers can designate a certain sum to invest each month regardless of how much the stock costs at the time. For instance, if a share of Microsoft costs $27, and the customer has only $100 to invest, it would mean he or she could buy only 3.7 shares.

Investors aren't allowed to buy fractional shares, but ShareBuilder makes it possible by paying for the remaining fraction. The company gets its money back by occasionally selling a complete share on the open market.

"I think it's a fabulous way for someone who is new to investing to get started," said Greg Smith, chief executive of the Pennsylvania State Employees Credit Union, which has been offering ShareBuilder's service to its members for five or six years. About 5,000 of the credit unions' 30,000 members use it today.

"If you called up a traditional brokerage and said I have $100 to invest, they'd laugh at you probably," Smith added.

Guion said besides ShareBuilder, three companies of note provide dollar-based investing: Portfolio Builder, BUYandHOLD and MyStockFund. Of those, she said, ShareBuilder has the largest piece of the market.

"I know they do, based on the several thousand households we survey," she said. "It has a much bigger share than the three of them put together."

Getting in on IPOs

Because of its relationship with the common investor, ShareBuilder has been part of trends as they happened.

When the stock markets reopened six days after Sept. 11, 2001, about 4,000 consumers signed up for new ShareBuilder accounts. Seely said that was in response to people supporting the public markets, which were largely expected to plummet that day.

More recently, the company has tried to address the upswing in the number of initial public offerings.

A common criticism of IPOs is that they are reserved for a bank's top-tier clients. Seely, using his more than 20 years in the securities industry in New York and San Francisco, is trying to change that for his customers.

In a handful of offerings — Portland-based McCormick & Schmick's restaurant, for one — ShareBuilder has gained underwriter status, allowing its customer to buy a designated number of shares.

"It was fun to see the way we could do it," Seely said. "The IPO process has improved, but it's still not really for the average guy or gal. I think we will enable people to do that as we get more into the business."

Although ShareBuilder did not participate in Google's recent auction-style offering — intended in part on attracting the everyday investor — it did see the impact the day Google started trading.

That morning, 49 percent of ShareBuilder's buy orders were for the search-engine company. In the first day, more than 1,000 ShareBuilder customers created recurring purchase plans for the stock, making it one of the company's top 20 for such plans by day's end.

For the 19 other stocks, it took three to four years to gain that status, the company noted.

Seely said these are all signs customer adoption of ShareBuilder is as strong as ever, and he doesn't see any reason to launch new products to raise more capital or file for a public offering. Instead, his focus is on maintaining the 40 percent gains in revenue for the foreseeable future.

"We are at the tip of the iceberg to grow this business," Seely said. "We will build it one customer at a time."