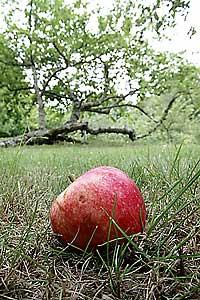 An apple didn't fall far from the tree at Piper's Orchard in Carkeek Park, which celebrates its 75th anniversary with festivities Aug. 21.
By Sherry Stripling
Seattle Times staff reporter

I've never been a good fit in the city, but I got away with it for the life spans of three dogs because of Carkeek Park.

On an isthmus between two canyons leading to Carkeek in the north end of Seattle, I grew up building forts in the teepee-sized cedar stumps that flanked Piper's Creek, and ran unleashed through nettles and mud to the sharp-shelled beach and silky sunsets.

That was my informal education about nature. The formal part began in Brownie Day Camp on Carkeek trails. That's why I had no choice when my old Girl Scout leader called recently to say:

Carkeek Park turns 75 in August. Get over here and find out what that means.

Anyone associated with Carkeek's evolution knows Nancy Malmgren's name. She's a visionary, a catalyst — to the reluctant, a thorn — who helped make government a partner in trying to reverse Carkeek's fate as a downstream dump for urban runoff.

Carkeek at the start of the 20th Century was the utopian home of the artistic back-to-the earth Piper family. Before that it was a day encampment for Native Americans, including the Shilshole Band of the Duwamish, who did not get their wish when they named what became Piper's Creek "Kwaateb," meaning "leave it alone."

My era began a few decades after the Pipers had departed, recent enough that we could smell the ripening fruit but not get to it because of the overgrown thistle and thorns that armored their abandoned orchard. In visits back home over the years, I watched motivated park users build trails, revive the orchard and showcase the wetlands.

For 39 years, Malmgren typed missives that helped lead to the return of spawning salmon in Carkeek Park. When they did, in 1987, it was a spiritual boost for all who wanted to save nature inside the city but weren't sure it could be done.

How'd I like to meet the man who saw the last spawning salmon in 1927, she asked?

Didn't I want to know who the Piper family was and know who saved their orchard? Or why my father's neighbors at the top of the ravine are pulling out their lawns and growing native plants in their ditches?

Lucky for me — because there's no Girl Scout badge in this — I wanted to know.

Carkeek is the park that almost wasn't

"Carkeek started with dissent and it continues with dissent," Malmgren, 75, said. "But eventually things get mushed out."

Three quarters of a century ago, Seattle Park Board members threatened to quit if the city pursued purchase of the land for Carkeek. Their lament was familiar: They didn't have enough money to maintain the parks they already had.

The City Council was in a quandary. Pioneer builder Morgan J. Carkeek donated land for the original Carkeek Park on Lake Washington in 1918, but that was condemned in 1926 to become the Naval Air Station at Sand Point. He then offered $25,000 for a new park, and, after much debate and hard feelings, the city put up $100,000, which meant the Pipers would be displaced — and not for the first time, either.

Andrew W. Piper, an artist and a socialist member of the Seattle City Council, was a confectionist and baker by trade.

Piper lost his shop in the Great Seattle Fire of 1889 and eventually fell on hard times. The large family moved from their downtown home on Boren Avenue to homestead at a spent lumber camp in what became Piper's Canyon (now a popular access to Carkeek from the southeast by way of the Eddie McAbee entrance).

Their 80-acre ranch included a large vegetable garden near where a water-treatment plant later was sited.

Minna Piper, and later her son, Paul, was the gardener and the orchardist (the patriarch, Andrew Piper, died in 1904). They raised flowers and vegetables, which they took to market by horse and wagon to sell.

Great-granddaughter Jeanne Ward, 79, who visited "the ranch" as a child before the Pipers moved in the 1930s to a brick house higher on the hill, recalls that Minna Piper and two of her daughters, Lillian and Tillie, lived in separate cottages. Paul, who made the family meals, lived in the cookhouse.

"In the winter, it was very festive," says Ward. "They would bring in beautiful greens and dried trillium leaves that smelled so good. They also had Christmas trees with these dangerous little candles."

By the time I started hanging out in the canyon, most of Piper's Canyon was wildly overgrown, guaranteed nettle stings.

The Viking District of the Boy Scouts completed a trail through in 1975. Walkers discovered the old orchard, and a few years later Piper family descendants joined with volunteers from what was then the West Cascade Tree Fruit Association to clear blackberry bushes from the trees that were still alive but horizontal.

"When they get to a certain age, they get tired," said Ron Schaevitz, an orchard volunteer for nearly two decades. "A couple of them have re-rooted where they touched the ground."

The Pipers had no plumbing. A spring ran under the cookhouse and the family opened a door in the floor to use Piper's Creek as a cooler, Ward recalls.

Which brings us to water quality.

Carkeek Park is the heart of a watershed with more than 17,000 residents. Except for the 216-acre park, the land is mostly covered by impermeable surfaces — pavement, roofs.

My parents moved into a new development in 1954 on Eighth Avenue Northwest, above the south edge of the park. Like the rest of their neighbors, they used pesticides and fertilizers with nowhere to run but through the ditches to Carkeek.

A few years ago, new neighbors moved in, ripped up lawn and replaced it with loam and native plants. I tsk-tsked when they planted over their open ditch, saying, "Oh, the city's not going to like that!"

Turns out the city is doing the same thing. Seattle Public Utilities has created pilot projects of natural drainage systems, big vegetated swales on streets above Carkeek. Instead of zooming rainwater that carries pet waste, motor oil and pesticides into culverts and Carkeek's creeks, the new systems mimic the forest duff. Plants and gravel slow the water and catch the yuk in the runoff.

The idea is to let creeks be creeks again, not just conveyances, says Beth Miller, who teaches children and adults these things as Piper's Creek Watershed educator for Seattle Public Utilities and Seattle Parks & Recreation.

Boyhood memories and hope for future

Walt Venema, 86, remembers fishing the creeks for cutthroat trout with his brother, Harry Jr. ("Jerry") after the boys moved in nearby in 1919. They used "bent pins, angle worms and No. 50 thread — and boy did we ever catch them."

In 1927, the boys chased what is believed to be the last spawning salmon — or at least the last that anyone is credited with seeing — from Piper's Creek through a culvert to Venema Creek (officially named later for their late father). A few years later, the deteriorating water quality reached the Venema house, making the family sick.

Venema Creek today is the cleaner of the two creeks because it runs by more residences, fewer parking lots. Hundreds of school kids raise chum fingerlings. After the fish spend two weeks in an imprint pond, where they get the taste and smell of Venema Creek, they fight their way back to Carkeek Park three to four years later to spawn, delighting the children who released them.

All is not perfect. You still wouldn't want to stick your hand in either creek and then plunge it into a bag of potato chips. Trees in the forest are aging and need new growth and protection from invasive plants. But because of the work started by the Carkeek Watershed Community Action Project 25 years ago, many people are working to bring change.

But most of all it's provided beauty and solace to calm the present generation and impress the next.

I have to agree with my old Girl Scout leader when she says:

"For a park that didn't have a master plan, an Olmsted plan, I think it's turned out pretty good."

Walt Venema, 86, left, saw what's believed to be the last spawning salmon in what is now Carkeek Park in 1927. Nancy Malmgren, 75, was instrumental in getting the first salmon to return to spawn in 1987. (KEN LAMBERT / THE SEATTLE TIMES)