Grete Larson, jam and jelly maker, left, and Berit Rolland share a joke at the farmers market in Edmonds. (ALAN BERNER/ THE SEATTLE TIMES)
Love to shop at farmers markets? Me, too. With so many markets in full swing, I thought it would be great fun to travel to a different neighborhood each day of the week. Once there I was determined to buy ingredients for that night's dinner, treat myself to a nosh and cart home at least one "goodie" I didn't need but couldn't resist. I had a blast.

During this food-focused foray, I found much more than great eats. I learned that my home market in Edmonds is big on art and crafts and that when I need a henna tattoo, there's one waiting for me in Ballard. Kids rule in Columbia City, where face-painters, balloon-hat makers and a children's booth are part of the market fun. And they don't do too badly in Bothell where they can ride the miniature Iron Horse Railway while their moms shop the market stalls for fresh flowers.

In Renton, I watched as a troupe of Finnish dancers in traditional dress fake-sneezed their way through a hilarious folk dance. And in Bellevue I marveled at the helpful attendants directing market traffic toward acres of free parking. Pike Place Market, the oldest continuously running farmers market in the nation and the only local market open on Mondays, also offers free parking: as long as you make it in and out of the Western Avenue lot in an hour. Which I did, no sweat, according to the smiling attendant. "Look!" he said, taking my ticket. "You've got two minutes left, we can chat for a while."

What's for dinner? A whole sockeye salmon ($27), cleaned and gutted, its eyes still bright, caught by the crew of the Seattle-based F/V Cora J in Ketchikan on Wednesday. I stuffed this big boy with basil and sweet onions bought at a flower stall ($1/bunch) and sent it off to the meet its maker: my husband, who had stoked the Weber with green wood from our Gravenstein, lending a distinctive smoky flavor to the centerpiece of a meal shared with friends.

That feast began with fresh baked baby pita pockets ($1.25/bag) and tzatziki ($2.50) from Everett-based Pita King Bakery, whose owner, Hassan Alaeddine was on hand offering samples. From The Farmer's Daughter, an organic produce stand, I'd cadged some incredible looking broccoli ($1.29/pound), steamed as a side. Oven-roasted golden beets (flower stall, $1/bunch) complemented the organic baby artichokes from Fir Island's Frog's Song Farm ($3/pound). I'd sliced those chokes, steamed them till tender and tossed them with the beets, some olive oil, salt, pepper and a spritz of lemon. For dessert: Haagen-Daz vanilla ice cream with Frog's Song's tiny "last of the season" strawberries ($3.50/pint).

Had to have it: Grete Larson's raspberry jam ($5) — one of the many fresh-fruit jams I buy each summer from this proud 75-year-old beauty whose prolific raspberry canes were smuggled into Sea-Tac years ago from her native country, disguised in a bundle of Norwegian newspapers.

Note: The market is closed this week because of the Taste of Edmonds.

What's for dinner? Two pounds of "Asian-style ribs": frozen grass-fed beef from Island Natural Meats in Langley ($10). These cross-cut short-ribs were perfect for making my quick and easy version of kalbi ribs. I combined equal amounts of Japanese soy sauce, sweet Thai chili sauce, Chinese oyster sauce and Indonesian kecap sambal to make approximately two cups of marinade, marinated the ribs in the fridge for an hour, discarded the marinade and grilled the ribs till they caramelized (three to four minutes on each side).

With these I served grilled escarole ($1.50) from Nature's Last Stand, plus sliced Clarance tomatoes from Kittitas Valley Greenhouse ($2/pound when culled from the "seconds" box).

The Nosh: I almost cried when I heard the guy with the portable brick pizza oven wasn't here today. Word has it that Ballardians adore his thin-crusted pizza slices. I made do with a sticky bun from Sweet 'n' Savory ($2.50). If this rich walnut- and raisin-infused roll was any indication of what that Ballard caterer can do, allow me to put in a word for their wares: Scrumpdillyumptious.

Had to have it: My Thanksgiving turkey. After chatting with one of the owners at the Thundering Hooves booth I went home and pre-ordered my big bird online (www.ThunderingHooves.net). From this Walla Walla Valley purveyor of pasture-finished meats and poultry I chose an heirloom-breed Standard Bronze ($3.99/pound), promising true turkey flavor and lots of dark meat. Pick-up date in November at a local church.

What's for dinner? A pound of brautwurst ($5.95) from Uli's Famous Sausage. German sausage-meister Uli Lengenberg's justly famous brauts, like all of his sausages, are made right here on the premises. Once grilled, I stuffed them into French baguette from Three Girls Bakery ($2.25). On the side: super-sweet white corn from Frank's Quality Produce (four ears/$2).

Had to have it: A birthday gift for Kosta, my kid's best friend. That athletic lad will love this "Rhythm Stick" — a handmade balancing apparatus wrapped with brightly colored tape ($21.75).

What's for dinner? Salade Nançoise! This composed salad was made with red-leaf lettuce from Heur Vang Farm ($1); fresh romano beans (flower vendor/$1 bunch), small mixed tomatoes from Whitney's Orchard ($2/pint) and the last of my farm-fresh eggs purchased from The Farmer's Daughter at my home market (Edmonds) ($3.50/dozen) where I'd also snagged this salad's "main course": canned sushi-grade albacore tuna from the Seattle-based vessel St. Jude ($3.50).

The Nosh: A pulled pork sandwich from Renton's own Bill's Bodacious Bar-B-Q ($5), topped with a combination of "Secret Weapon" and Bill's own "Hot" sauce.

Had to have it: Zucchini relish ($5.50) from the generous lady at the Good Eats stand, who proved her company well-named as she offered samples of her sweet, red-pepper-bedecked relish, zucchini pickles, fruit chutneys and marinated cheeses.

What's for Dinner? Fresh pasta ($4/pound) from Nonna Maria, the Italian restaurant on Queen Anne. This purchase led me on a treasure hunt in search of ingredients for "sauce." That plunder included foraged mushrooms from a vendor selling tiny morels and chanterelles (a handful of each, $3.50); sweet heirloom cherry tomatoes from Rockridge Orchards ($3.50/pint); and a round of herbed goat cheese from Bainbridge Island's Port Madison Farm ($4.50).

The Nosh: Bing cherries from Tonnemaker Orchards ($2/pound). I needed these to practice for the "Spit-a-Pit" contest. Ready. Aim. Bull's-eye!

Had to have it: I didn't need much persuading to take winemaker Gordy Rawson's suggestion: a bottle of his 2002 Chatter Creek cabernet franc ($18) from his U-District winery. There was plenty of wow in that bottle, made with single-vineyard grapes grown in the Columbia Valley.

What's for dinner? Shellfish from Taylor Shellfish Farms. A dozen Kumamoto oysters ($9), plus a 2-pound bag of Mediterranean mussels marked down from $7 to $6 (sometimes it pays to show up late at the market!). The oysters, served on the half-shell, were well worth the expense given their fresh sea flavor and the ease with which they give it up to my oyster knife. And there's nothing better than sweet, meaty Mediterranean mussels steamed with a splash of Pernod and a handful of tarragon from my garden. I served this stellar shellfish with 15 different salad greens from Full Circle Farm. "They're $3 a bag, but I'll let you try them for $2," the vendor bargained. Sold!

The Nosh: A big, rich chocolate-chip cookie from Cookies By Bob ($1.50). Who's Bob? Cookie-maker Robert Moore, the man behind the big glass cookie jars. Need a great gift? He'll sell you a prettily boxed baker's dozen for $18 — 10 percent of which is donated to Northwest Cancer Partners to aid in their fight against breast cancer.

Had to have it: A small lavender sachet from Renton Lavender Farm ($1.50).

What's for Dinner? Handmade tamales from Hermosa Mexican Foods, a newly launched family business out of North Bend. Kudos to the kid who was helping his dad manage the traffic at this popular hot tamale stand. He was smiling in the heat while taking orders for Sonora-style tamales (shredded pork with red chili sauce), California-style tamales (chicken in green chili sauce), and the mild, meat-free garden-vegetable version. I settled on a pair of Sonorans ($4.50) and another of the Californians ($4.50), later steaming the corn husk-wrapped masa cakes, as directed, for 20 minutes. "These are great!" said my husband. And he hates tamales.

The Nosh: Sweet little coconut balls from Dulcefina ($2), purveyor of "sweet Veracruz delicacies for any occasion." The lovely sweets-makers at this booth proudly showed off photos of their specialty cakes — perfect, they said, for weddings, First Holy Communions and other important events.

Had to have it: A half-flat of mix-your-own berries from Lenning Farms in Mount Vernon ($9.50): two pints each of boysenberries and strawberries, one each of blueberries and blackberries.

Nancy Leson shopped for a week's worth of meals at farmers markets like this one in Edmonds. (ALAN BERNER/ THE SEATTLE TIMES) 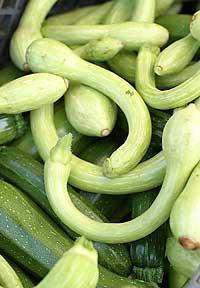 Many of the local farmers markets carry interesting produce such as varieties of summer squash. (BARRY WONG/ THE SEATTLE TIMES)