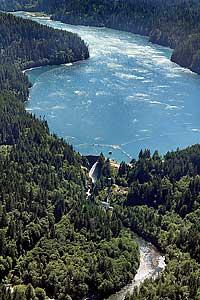 The dams on the Elwha River are coming down, but the process involves complicated science and politics. Lake Mills was formed when Glines Canyon Dam was built 8.5 miles upstream from the Elwha Dam. (MARK HARRISON / THE SEATTLE TIMES)
By Jim Downing
Seattle Times staff reporter
PORT ANGELES — After years of negotiations, the biggest dam-removal project in history is about to begin, promising to restore one of Washington's legendary salmon rivers.

Today, with Rep. Norm Dicks looking on, the City of Port Angeles, the National Park Service and the Lower Elwha Klallam Tribe will sign an agreement allowing the $182 million Elwha Restoration Project to go forward.

Congress approved the dam removals in 1992. Following an environmental review process, the project stalled as negotiations dragged on over federally funded mitigation of the project's impact on local communities.

"We've finally hammered out the details with the local parties," says Dicks. "This project is going to happen."

Starting in early 2008, the 108-foot-tall Elwha Dam and the 210-foot-tall Glines Canyon Dam will be dismantled in stages, reopening 70 miles of prime salmon and steelhead spawning habitat. The Elwha offers a unique opportunity to fully restore a river since nearly all of the river's watershed is preserved in Olympic National Park, free from human impacts. Taking out the two dams is expected to increase the amount of silt in the river — some 18 million cubic yards of dirt and gravel have been trapped behind the dams over the last 93 years. To mitigate the coming changes, the federal government will fund $70 million in civil works: Port Angeles gets a water-treatment plant; and the Lower Elwha Klallam Reservation, located at the mouth of the river, gets a sewer system, a raised flood-protection levee, and a fish hatchery.

A total of 145 dams have been removed in the United States since 1999. No other dam that has been removed intentionally has come close to the size of either of the two Elwha structures.

"This will be an enormously important precedent for dam removal," says Elizabeth Grossman, author of "Watershed: The Undamming of America."

"People will definitely look to the Elwha as evidence of whether this kind of project can really work."

Tearing down the dams is the easy part of the project, says Brian Winter, who has managed the Elwha project for the National Park Service since 1985. "People think it's a big engineering deal, but it's really just all the dam construction steps that we've used for decades, in reverse."

At Elwha Dam, construction crews will start by building a diversion channel around its north side. That channel will lower Lake Aldwell's level by 50 feet, allowing the excavation of the remainder of the dam and the removal of rock fill from the original river channel. The river will then be restored to its original channel and the diversion channel will be filled.

Glines Canyon Dam must be taken down more gradually, since, being the upstream dam, it has held back a much larger amount of sediment — 14 million cubic yards, or enough mud and gravel to fill Safeco Field to the upper deck three times.

Most of the sediment in Lake Mills has been deposited in a delta where the turbulent Elwha meets the quiet reservoir water — much as all rivers naturally build deltas where they meet the ocean. Mathematical and physical models designed especially for the Elwha project indicate that by lowering Glines Canyon dam in 7-1/2-foot increments over 2-1/2 years, about 8 million cubic yards of that sediment will remain deposited along the sides of the canyon slopes.

"We should be left with a series of terraces," says Tim Randle. "That's what natural topography looks like when you hike up there. The terraces won't actually be natural, of course, but they'll be consistent with the natural landform."

What the other 6 million cubic yards of sediment will do as it moves downstream is less certain. While scientists can make educated guesses, they will have to wait to see exactly how much the riverbed will rise downstream of the dams, whether the delta at the mouth of the Elwha will be rebuilt, and, most importantly, to what degree the sediment will generate or obstruct fish spawning habitat.

"The Elwha is in a class by itself with respect to the amount of sediment that will be coming down the river," says Gordon Grant, research hydrologist with the USDA Forest Service Pacific Northwest Research Station in Corvallis, Ore. "The most sediment that has been released in a dam removal to date is only on the order of a few tens of thousands of yards."

Though the Elwha dam removal involves some uncertainties, it also provides an opportunity to add to the understanding of how rivers work. Scientists will have an unprecedented opportunity to watch a river evolve as it "digests" a large amount of sediment.

"In geomorphology, we're almost always looking at a river after the horse has already left the chute, trying to reconstruct what happened in the past," Grant says. "Here's a case where we get to watch the horse not just from the chute, but from all the way back in the barn."

While sediment is important, what will really make or break the Elwha Restoration Project is whether the salmon come back.

In 1911, the Olympic Power Company's Elwha Dam shut off 70 miles of spawning habitat in the Elwha and its tributaries to steelhead and five species of salmon. When it was built, the dam violated a state law requiring that all dams provide for fish passage. In a compromise, the state Fish Commission built a hatchery which was then abandoned in 1922.

The dams were built for hydroelectricity, not water supply. Together they generate about 28 megawatts at peak capacity. The Department of the Interior bought the two dams in February 2000.

Today, fish still swim up the river and school at the base of Elwha Dam, looking for a way upstream. Fisheries biologists estimate that the current annual wild run of fewer than 5,000 fish is 1.3 percent of its historic level.

On a recent July morning, Olympic National Park fishery biologist Sam Brenkman and a crew of Park Service and USGS staff and interns electrofish on a stretch of river between the two dams.

One worker stuns young rainbow trout while another nets the fish, measures, logs and releases them.

Brenkman's team is one of many working on the river to document pre-dam removal fish populations and habitat conditions. Rainbow trout, cutthroat trout, and bull trout live upstream of the dams.

Jeff Duda, a research ecologist with the USGS, is particularly interested in gauging the level of so-called marine-derived nutrients in the system. Before the dams went in, mature salmon and steelhead spawned and died in the upper river, serving as a major source of nitrogen and phosphorus for the entire river basin ecosystem.

"When the fish leave the river, they're the size of your little finger, but when they return, they're as big as your thigh," Duda says. The difference between thigh and pinky size represents the net amount of nutrients that each spawning fish brings from the ocean to the river ecosystem.

George Pess, a fisheries scientist at the NOAA Northwest Fisheries Science Center, has been cataloguing the available fish habitat in the river above, below, and between the dams. His team has found that even below the dams, the river has a complex structure with much variation in depth and flow velocity — a good sign for fish recovery.

Together, the biologists are assembling a comprehensive picture of the pre-dam-removal Elwha ecosystem. That way, if the fish don't come back to the river, scientists will have a basis for understanding why.

"From a science perspective, we're trying to make this as seamless as possible," says Pess. "This is a glorified case study to begin with — and that's all it can be. ... I put my faith in the fish. Look at Mount St. Helens — it took the fish in the rivers there just a few years to recolonize. If we let the natural processes work, I think we'll be OK."

Despite the scientific consensus that removing the dams is the best way to bring back the salmon, some local residents remain skeptical about the project.

"They could've put in fish ladders for $12 million and it would've done just as good a job as tearing those dams out," says Marv Chastain of Port Angeles, the former director of now-defunct Rescue Elwha Area Lakes, a local group opposed to the project.

"You can't unring the bell," says Dee Bohonis, of Joyce. "The system has reset. We need to stop doing the dumb stuff in the first place, not trying to undo the things we've already done."

Humans have lived at the mouth of the Elwha for at least 1,700 years. Vancouver Island's southern tip lies 10 miles north across the Strait of Juan de Fuca. Eighteen miles to the south, 6,995-foot Mount Carrie looms through the notch the Elwha cuts between Hurricane and Happy Lake ridges.

Robert Elofson, 51, walks along the river cobbles of the Elwha delta, in the Lower Elwha Klallam Reservation. With no new sediment from the river to build the delta, the ocean is slowly eating its way upstream.

"The delta used to be about five times as big as it is now, and the beaches were sandy," he says. "This used to be a good clam beach."

Elofson's adult life will likely span the Elwha dam-removal project. In 1976, after graduating college, he helped to challenge the re-licensing of the dams on the Elwha. He worked as a commercial fisherman in the area for 25 years before becoming the tribe's river restoration director.

"I should see the first harvest about the time I retire," he says. "I want to hike up to Elkhorn and catch a 10-pound coho." Elkhorn is 30 miles up the Elwha.

Once the dams come down, the tribe has agreed to abandon its historic fishing grounds at the mouth of the Elwha until the runs recover.

"Tribes consider themselves a part of the environment," Elofson says. "There's some shame that will be removed when the dams are gone, even though we couldn't have done much to stop them from being built in the first place."

"I don't want to have to tell my grandkids that we had a chance to get this done and didn't."