This is the holding area so those in custody can be led directly into courtrooms without using public elevators or hallways. (BETTY UDESEN / THE SEATTLE TIMES)
By Maureen O'Hagan
Seattle Times staff reporter
Despite its massive concrete, steel and security features, the new United States Courthouse in Seattle, which opens Aug. 17, is no post-9/11 bunker.

The light pours into the glass entryway; it bounces around sparkling prisms on a giant hanging sculpture over the clerks' office; it sneaks into courtrooms through specially made window louvers; and it envelops judges' chambers that look out over Elliott Bay.

Despite the earlier fears of some Seattleites, this does not look like a fortress. According to Court Clerk Bruce Rifkin, that's because all along, they've maintained two goals: "to make it feel welcoming and at the same time have security."

He's right in more ways than one. This courthouse was a long time coming, spanning three U.S. presidencies and encountering numerous hurdles.

During a tour yesterday, Rifkin, along with U.S. District Judges Robert Lasnik and Carolyn Dimmick and Dennis J. Berhalter, the courthouse's project manager, were full of enthusiasm for the building.

Among the features pointed out:

• There is a large plaza out front, with trees, benches and a reflecting pool. The plaza is designed to prevent truck bombers and their ilk from parking nearby, but it's also aimed at enticing downtown office workers to visit with brown-bag lunches.

• Another reflecting pool inside the building is not only pleasant to look at, but also acts as a security feature, directing visitors toward metal detectors.

• Paintings and sculptures by six artists are designed to fit the space. Among the most striking are paintings on the first floor of ordinary people at work by artist Michael Fajans. On the third floor, those same people are depicted as jurors.

• Courtrooms are configured with high-tech features such as video conferencing and real-time transcription.

The new building will replace the old courthouse, built in 1938, which seems cramped and antiquated, Lasnik said. There were no separate corridors for prisoners, for example, so they had to be paraded past witnesses sitting in the halls and into the front door of courtrooms. They even had to use the same elevators as judges.

And since space was tight, the U.S. Attorney and the Bankruptcy Court (which will be in the new building) had to rent offices elsewhere.

Beginning in the early '90s, nearly a dozen sites were considered and then nixed for a new courthouse, before a full city block at Seventh Avenue and Stewart Street was selected in 1998. After that, architects NBBJ of Seattle faced their own dilemmas, like supporting the vast open spaces needed for courtrooms while avoiding that concrete-behemoth feel.

Along the way, torrents of criticism hit other new federal court buildings around the country, where the digs were seen as too lavish and the space excessive. Two investigations revealed that federal judges elsewhere had revised the design guidebook that sets parameters for court projects, giving themselves such things as bigger chambers and better décor.

The fallout from this excessive spending led to a scaling back of the Seattle courthouse, from a $260 million projected cost to today's construction cost of about $171 million.

The whole project, which hinged on the whims of Congress, seemed at times on the brink of oblivion. Finally, after years of tantalizing promises, Congress appropriated the money to build the structure in 2000.

According to Judge Lasnik, the new courthouse won approval partly because members of the Seattle judiciary did something unheard of among their brethren: They agreed to share.

The sharing won't occur for several years, however. There are now 11 U.S. District Court judges or magistrates and five bankruptcy court judges. So they will begin sharing courtrooms when additional judges are appointed in the district.

"This was very controversial," Lasnik said. "A lot of federal judges didn't want anyone to agree to courtroom sharing."

Yet, there are rarely trials in the federal system, so courtroom sharing makes sense.

In addition, federal judges usually have their own private law libraries in chambers, but the Seattle judges agreed to share those, too, so there is one law library per floor.

"We saved money because every judge didn't have to have complete sets of all the books we use," said Judge Dimmick, who was drafted as the project's judicial liaison.

Dimmick kept the project on track through years of difficulties, as she met with architects, smoothed things over with the General Services Administration, which acts like the court's landlord, and convinced her colleagues that they had input into the project while giving them limited choices.

For example, each judge has virtually the same size chambers, with about 2,100 square feet of space, a bathroom, a kitchenette and a conference room, but they were allowed to choose from two colors of carpeting and could select their own bathroom wallpaper.

"Others of us might not have been so welcome" in this position, Lasnik said, noting Dimmick's winning personality. "She was great at getting people to agree."

The existing courthouse will close next Thursday, and the move into the new building will be the next day, Aug. 13.

Artist Michael Fajans adjusts the lighting on one of his murals in the new United States Courthouse, which opens Aug. 17. The subjects of this first-floor mural are real people at work. In a separate mural on the third floor, they are illustrated again, as jurors. (BETTY UDESEN / THE SEATTLE TIMES) 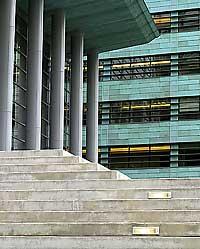 Columns and steps define the entry of the new U.S. Courthouse. A reflecting pool inside directs visitors toward metal detectors. (BETTY UDESEN / THE SEATTLE TIMES)

The new courthouse is on a full city block at Seventh Avenue and Stewart Street in downtown Seattle. (BETTY UDESEN / THE SEATTLE TIMES)