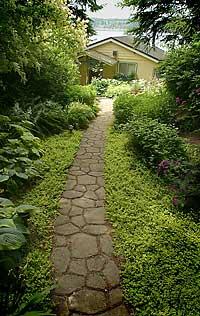 Leaning back against his deck railing, Bill Zazzo takes a long pull on a cold one, gestures toward the view and says, "The only difference between this place and heaven is the ZIP code."

On a warm summer day it would be darned hard to disagree with Zazzo, who never takes for granted the beauty of his Herron Island getaway in South Puget Sound. Deer graze amid stands of madrona, fir and huckleberry. The only sounds are the water — that's Case Inlet sparkling just beyond his deck — and the birds. Herron Island, he notes, is home to 32 different species.

Four years ago Zazzo and his wife, Pat, longtime Kirkland residents, bought this one-bedroom waterfront cabin to, in his words, "escape the insanity of the city." Since then, they've only missed four weekends here.

They've also done something else: joined the vanguard of homeowners, many of them baby boomers, who are realizing that just as a first home can be a tremendous wealth-generator, so can a second home. And equally important, it can provide something more valuable than mere money: A place to unwind with family and friends. A place to build fond memories.

For those just getting started on the idea, local real-estate writer Tom Kelly has co-authored a new book, "How a Second Home Can Be Your Best Investment" (McGraw-Hill: $16.95). Unlike other boomer-oriented real-estate books that explore retirement locales or focus on how to get rich quick, this book heavily delves into the wisdom and financial mechanics of second-home ownership.

Co-authored by John Tuccillo, the former chief economist for the National Association of Realtors, it covers such topics as how to choose where to invest, how to finance it, how to maximize cash flow and when to sell.

And there's considerable information about the tax benefits of homeownership, which became much more advantageous with the federal Taxpayer Relief Act of 1997. That, in essence, moved ownership from the strictly shelter column into the financial portfolio column. None too soon either, as the high-flying stock market of the late 1990s began to tank in 1999, leading investors to seek other, safer, harbors for their money.

"The production of second homes has definitely gone up because more and more baby boomers are getting into this," says Gopal Ahluwalia, vice president of research for the National Association of Home Builders, estimating that 125,000 new second homes are being built a year. He says there are now 12 million to 13 million second homes in the U.S. While some owners keep theirs just for themselves, many more either rent them out full time or part time.

Kelly is a former Seattle Times real-estate editor who now writes a syndicated column and has a radio program on 710 KIRO. The partial owner of a lakeside cabin, he's open about his bias that real-estate investment is a fiscally sound idea. Not only does it have great tax advantages (thanks to that 1997 federal tax change, homeowners can now avoid paying tax on hundreds of thousands of dollars of appreciation — and can do it over and over), but it has sound income-producing possibilities, too, he says.

As Kelly and Tuccillo write, "The key to all this, the 'secret sauce' of real estate investment, if you will, is your ability to either evolve an owned property from a cash generating investment to a retirement home, or use the property to trade for that retirement or vacation place you really want. You can do this without sacrificing any of the appreciation that has benefited your investment. No expenses, no taxes."

But inquiring minds probably are wondering how homeowners can buy a second house when they barely can afford their first one. It's easy, Kelly says, if they have some equity to work with.

Tom Ward, a Seattle loan officer with U.S. Bank Home Mortgage, says he's definitely seeing an uptick in the number of second-home buyers. Generally they're people considering early retirement — or retirement period. "They've been thinking about it for quite some time, and they're thinking that now is the time because we're not going to be seeing these interest rates again."

Although mortgage interest rates have been climbing recently, they're still in the 6 percent range, which historically has been considered low. "With the kind of appreciation we've seen here," Ward said, "it's very easy to take some equity out of the primary residence and use it as the down payment."

Other options: Take out a line of credit, seek seller financing, look for a lease-option to buy, go in with a partner or cash out other investments.

The Zazzos — he's a marine-engineering instructor, she's a homemaker and volunteer — combined the last two options to purchase their Herron Island getaway with its 80 feet of waterfront. Their son Michael is co-owner, and Bill and Pat sold Microsoft and other stock to raise their share. "It was four years ago, so do the math," Bill says, smiling. "It was a good move."

Indeed, Microsoft stock is worth about half what it was when they sold it, and their cabin, which cost $145,000 ("fully equipped, down to the TV and stereo," Bill says), is now worth at least $30,000 more. Even more important, they get to actively enjoy their investment, and as author Kelly points out, "You can't enjoy a stock certificate, but you can get a lot of memories out of a place at the lake or ocean."

The Zazzos didn't rush into their purchase. Indeed they shopped second homes from the San Juan Islands to the South Sound. Herron Island won out because of its beauty, its tranquility, its privacy and certainly its prices. The only way to get there is by a 10-minute ride on a private ferry. Their real-estate agent, Dallas Amidon, jokingly calls it "the $100,000 ferry." He says that's how much less Herron Island real-estate costs compared to nearby mainland waterfront, all because of its remoteness.

In the end, it took the couple three years to find the perfect property. In Kelly's view, spending the time to really research a second-home purchase is crucial, especially if it's also going to be income-producing.

"If you take the time to do your work, you create two piggy banks," Kelly says. For example, many buyers want their second homes to be rentals. If so, they have to figure out the best locations to insure a steady pool of renters. And they also must figure out how they'll handle such inevitabilities as vacancies and repairs — two topics his book covers. It also includes many stories about individuals and how they made their second-home purchases work.

Sometimes it's in surprising ways. For example, Kelly has found that increasingly second-home buyers don't just want resort-type getaways. Some are buying urban condominiums, a fact seconded by Warren Ballard, vice president of Williams Marketing, a condominium-sales firm in Seattle.

"Second-home buyers are becoming more and more of our market," Ballard notes. The typical ones tend to be in their 50s and 60s, "more mature and financially stable." And sometimes they recruit friends, thereby insuring a built-in social group in a new location. That was the case with four sets of buyers from Arizona. They all recently purchased units in a Seattle high-rise, intending to spend portions of the summer here.

Still, as Bill and Pat Zazzos' Herron Island neighbors show, second-home buyers don't need to be wealthy or older. By the time they were 30, Gary and Judy Soriano had teamed with another family member to purchase a two-bedroom vacation cottage priced at $71,500. Gary is a QFC produce manager; until recently Judy was a call-service supervisor. After purchasing a Mill Creek home, they were able to save enough for the down payment on their island place.

"Friends ask, 'How can you do that?' " says Judy, who confesses she'd rather save than shop, and hates to have credit-card debt.

"I think you can do that if you take care of your money," explains her husband. As a result of their frugality, they've leveraged themselves into two homes — and they're not yet 35. 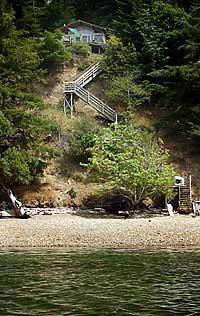 The Zazzos' Herron Island home: Real-estate writer Tom Kelly's new book discusses reasons to buy a second home, which include making an investment that can be used for enjoyment and financial gain. (ELLEN M. BANNER / THE SEATTLE TIMES)