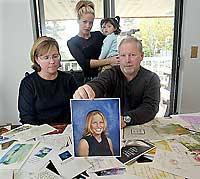 Bill Burkheimer holds a picture of his daughter Rachel, who was killed in 2002. With him is his fiance, Lori Pursley, left, and his daughter Meghan, top, holding his 19-month-old granddaughter, Jaida. (STEVE RINGMAN / THE SEATTLE TIMES)
By Jennifer Sullivan
Times Snohomish County bureau
EVERETT — Bill Burkheimer concedes he doesn't know what life will be like without judges, juries and the vindication of confronting the people who killed his daughter.

His ex-wife, Denise Webber, is searching for distractions now that her focus is no longer on a criminal-justice system that has become all too familiar over the past 22 months.

Burkheimer and Webber walked out of the Snohomish County Courthouse yesterday after facing their daughter's killers for what both hope will be the last time, not quite certain what lies ahead for each. With the sentencing of Tony Williams, 22, and Maurice Rivas, 20, for the Sept. 23, 2002, kidnapping and slaying of 18-year-old Rachel Burkheimer, the divorced couple close a terrible chapter in their lives.

Behind them is the loss of a daughter, the awful revelation that seven men and one teenage boy were responsible, months spent in courtrooms for countless hearings and three jury trials and the numbness that comes from two lives placed interminably on hold.

"I think a lot of our emotional work has been suspended through this process," said Burkheimer, 52, who works for Verizon and lives in Marysville. "Being here (in court) I feel like I'm contributing to the process. So now what do we do?"

The family has become such a common fixture in the halls and courtrooms of the Everett courthouse that they've grown close to corrections officers, prosecutors and security staff . As Burkheimer joked yesterday, "It's like we've become part of the furniture."

"This is really quite unprecedented for a family to go through this many trials. Their lives have revolved around the adjudication process," said Sandra Fitzpatrick, a victims' advocate with the Snohomish County Prosecutor's Office.

Another victims' advocate, Kimala Rendon, who has become close friends with Burkheimer, Webber and their surviving daughter, Meghan, has warned them that life without the trials, the sentencing hearings and the regular meetings with prosecutors and detectives "is the hardest part."

"Life without the distractions is going to be hard for them," said Rendon, who works for Families and Friends of Missing Persons and Violent Crime Victims. "Now comes a different kind of healing."

Like several of the other defendants, Williams and Rivas apologized yesterday to Rachel Burkheimer's family.

Burkheimer cried as he told Rivas that three weeks before her death Rachel Burkheimer excitedly told him about her good friend, Maurice, and her plan to finish her senior year at Lynnwood High School with him.

Instead, Rivas was among a group of men and one boy who conspired to kidnap and kill the one-time Marysville High School student.

On the day of her death, Rachel Burkheimer was lured into a trap set by John Anderson, her ex-boyfriend, and his friends John Whitaker and Yusef Jihad. The men believed she had been sharing their gang's secrets with a rival gang, according to prosecutors. Told that Anderson wanted to speak with her, she went to Jihad's south Everett duplex, only to be bound, gagged and held against her will for hours.

She eventually was placed in a duffel bag and thrown into the back of a sport-utility vehicle. Rivas, Whitaker and Matthew Durham drove her around the county before picking up Anderson and heading up to a remote site near Gold Bar, according to court testimony.

It's a story her parents have heard many times. Every detail, every aspect of each defendant's role in the slaying is ingrained in their memories.

Now Webber said it's time to "change her focus."

She is planning a trip to Israel with friends from Calvary Chapel in Marysville. For Webber, who has been unable to work since her daughter's slaying, her faith has helped her cope with the last two years. The 49-year-old Marysville woman is also working with local lawmakers and parents of other victims on a bill that would make not reporting a crime punishable by time behind bars.

Webber believes Jihad's girlfriend, who discovered Rachel Burkheimer bound, gagged and beaten in her garage but never called police, should have been held responsible.

"Right now I'm going to be focusing on taking it easy," Webber said.

Her former husband believes the two families now can celebrate Rachel Burkheimer's life through happy events like family get-togethers. Events that will no longer be overshadowed by court testimony about the way she died.

"The case may go away, but Rachel never will," Burkheimer said. "Her life was not tragic; her death was."

Burkheimer and his fiancée, Lori Pursley, plan to marry in the near future. The couple, who got engaged about a week after his daughter's body was found, never set a wedding date because their lives revolved around the criminal cases.

"How could we focus on anything but Rachel?" Pursley said yesterday. "Hopefully we'll have a little more time and be in the right frame of mind to have a little happiness."