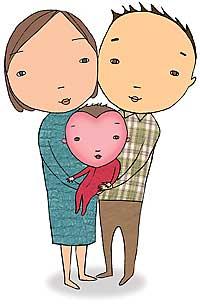 The first weeks of Wyatt Newton's life were horrible.

After a difficult labor, the baby had to be mechanically suctioned from the birth canal. At 23 hours, he stopped and restarted breathing then went into seizures. He'd had a brain hemorrhage.

Three days later, his mother — whose first pregnancy had ended in miscarriage — was in the emergency room with an anxiety attack.

When Wyatt came home at 7 days old, he was on anti-convulsive medication. At first he was somewhat predictable and easy to comfort. But within days he was screaming and arching his back in pain. He had trouble sleeping and eating and cried nonstop.

The new parents didn't know what was wrong or what to do.

Wyatt's parents didn't realize their fears could jeopardize their baby's mental health. Anxious parents may not accurately observe and understand their baby's primitive cues, research shows. A frustrated infant may get a profound early message that the world can't be trusted.

Wyatt was learning bit by bit that his parents didn't always meet his needs.

"It's hard to conceive of an infant being anything but mentally healthy," says Kathryn Barnard, director of the Center on Infant Mental Health and Development at the University of Washington.

It matters how well parents "listen" to baby's cues because their responses affect mental and emotional development.

A key indicator of infant mental health is the ability to self-regulate. The baby can get himself to sleep and get himself to waken. When awake, he is content and happy to take in the surroundings, Barnard says.

Parents help the baby learn those skills by being responsive. For example, research shows the faster and more often you attend to a crying baby the less he cries, Barnard says. In other words, it's not possible to spoil a baby.

Babies who don't have that trusting first connection, says Barnard, are at greater risk for developmental delays and emotional and behavioral problems. They can be less ready to learn. As teenagers, they might be prone to depression or acting out.

What can go wrong

Many things get in the way of infant mental health: A mother who has unresolved feelings over a trauma or loss, a career woman who fears bonding with the baby will create an emotional impediment to her return to work or parents who are locked in constant verbal conflict.

Some trouble signs, according to Barnard:

A parent feels inadequate or unhappy about parenthood. The baby may be seen as interfering with success at work or with a goal like graduating from high school. Feeling trapped, the parent may see caring for baby as difficult, undesirable work.

The baby has trouble falling asleep or staying asleep at night, leading to parental sleep deprivation.

The baby cries inconsolably. The average baby cries about 1.5 hours over the course of a day, says Barnard. Relentless crying points to brain or neurological immaturity, not bad parenting.

The baby does not exhibit the full range of emotions. For example, the baby doesn't cry and doesn't smile. To develop normally people must be able to express and respond to a variety of emotions.

The parent's job is to notice and understand such cues.

When Tami Newton got pregnant at age 34, neither she nor her husband, JD, had any experience with babies. No younger siblings. No baby-sitting.

Tami did her best to become informed. She asked other women in a pre-natal yoga group "Hey, what's this mother thing all about?" She studied information online and talked with her midwife.

She and JD took a four-week hospital-sponsored birthing class.

But none of that prepared them for the emotional part.

"The second the baby's out, you're on your own," said JD, holding Wyatt on his knee in the living room.

Those first difficult weeks at home took their toll. The couple started doubting each other's judgment and snapped at each other a lot, said Tami.

The situation they found themselves in isn't uncommon.

"We do a horrible job of preparing parents for parenting," said Barnard. Often relatives experienced in child-rearing don't live nearby. And reading a book, she said, is very different from getting personal coaching — and not nearly as helpful.

It's normal to want and need help.

Several initiatives in the Seattle area are trying to answer the need. One such program at Swedish hospital teaches new parents relationship skills and strives to keep dads involved. Called "Bringing Baby Home," it started as part of an ongoing study by John Gottman, a well-known researcher on marriage, couples and parent-child relationships.

Gottman is a professor emeritus at the UW, where he founded the Family Research Lab, also called the "Love Lab."

His new research on couples with newborns is sponsored by The Talaris Research Institute, a Seattle-based nonprofit that aims to advance understanding of early brain development.

Talaris, in partnership with KCTS-TV, also is producing public-television information spots on the importance of parenting in the early years.

A group called Listening Mothers sponsored by Family Services of King County provides an eight-week discussion group for new mothers to shed light on the emotional communication between mother and baby.

At the UW, the Center on Infant Mental Health and Development trains specialists to provide therapeutic care to parents and their young children. Last year, its Birth to Three Research Lab opened to study parent-child relationships, and it is currently looking at mothers with postpartum depression.

"I wanted some help"

Tami jumped at the idea.

"I wanted to get on it quick. I wanted some help."

Infant mental-health specialist Marie-Celeste Condon started working with the couple during weekly home visits for the next six months.

They set these initial goals: Understand baby's behavior. Discover the meaning of baby's "nonstop crying" and how to quiet him. Recognize undesirable parenting patterns.

Tami learned how to chart Wyatt's behavior problems in a journal. That helped a doctor diagnose reflux disease and prescribe medication that eliminated the baby's screams, back arching and sour burps. She also learned that breastfeeding wasn't only about nutrition. Wyatt used that time to communicate. It was the start of a small conversation.

JD — a 6-foot-4 construction worker — learned he wasn't going to break his son. He gained confidence in his ability to calm the baby. He found out that whatever time he spent with Wyatt was valuable. His son knew him and could even recognize the sound of Dad's slippers in the hall.

Both parents learned that if Wyatt looked away, he was trying to steady himself emotionally. When he looked back, he'd be ready to communicate again.

Wyatt Newton turned 9 months old in June. He has apple cheeks, red hair and a bright look in his blue eyes. Condon reports that he now eats and sleeps regularly. He is easily soothed and consoled. He stays calm and alert when playing and no longer takes anticonvulsive medication.

Wyatt and his parents have grown in their capacity for engaging one another.

"Their everyday conversations bring them all comfort and joy," Condon says.

Tami puts it this way: If she and JD had never learned how to read their baby's emotional cues, "Wyatt would be just as tall today. But he wouldn't be the same baby." 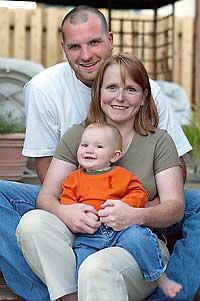 Little Wyatt Newton's first few weeks of life were especially difficult for him and his parents, JD and Tami. Home visits from a specialist from the UW's Infant Mental Health Center were a big help. (JIM BATES / THE SEATTLE TIMES)