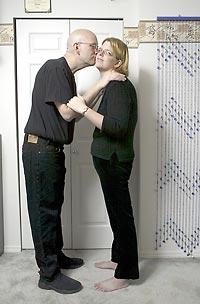 By Nick Perry
Seattle Times Eastside bureau
Exactly one year after undergoing back-to-back weight-loss operations, Leo and Jessica Loos partied in a free-spirited way they couldn't have imagined before.

Leo, wearing a tight polyester shirt and pants with a 34-inch waist, gave up protesting his lack of rhythm and started grooving at the Fenix Underground nightclub in Seattle. A patron stumbled as he checked out Jessica dancing in her slim black dress. But such reactions can be bittersweet for the pair.

"In the back of my mind, the fat girl is still a part of me," Jessica said. "If he knew her, would he still be looking?"

The Looses' combined weight topped 700 pounds last year before doctors reduced each of their stomachs to the size of a golf ball. Their journey since has taken them through months of dramatic weight loss but also emotional upheaval and some severe medical complications. Now it appears both have stabilized, each at about half the size they were before gastric-bypass surgery.

Leo, now 196 pounds, needs to remind himself he can fit his Dodge Ram truck into much tighter parking spots and still squeeze himself out the door. Jessica, 162 pounds, proudly recalls a Diamond Rio concert last summer where she was able to fit in the seat and cross her legs, two things she couldn't do before. At Christmas, the Eastside couple were able to share a full-sized bed for the first time when they visited Leo's mom in San Diego.

Their emotional changes have been just as striking.

Leo, 42, said he often felt angry as a young man — even before he started gaining weight in his early 20s. He began submerging his feelings, which left him easygoing but numb. Now, his new energy and health are inspiring him to rediscover his emotions, he said. He is even willing to feel more anger and pain if it lets him feel deeper love.

Jessica, 27, believes losing weight has already boosted her self-esteem. She suffers depression and has been diagnosed as bipolar, but since the surgery she has been able to cut way back on her medication.

"For the first time in my life I am able to say I love and like myself — and actually mean it," she said.

The Looses said the emotional bond between them has deepened over the past year, reinforced by moments like those when Leo comforted Jessica as she lay in the hospital suffering complications last May. Even when doctors told Jessica they might need to take the drastic step of reversing her bypass, she felt secure.

"Leo was so supportive that I thought even if I gain the weight back, he is still going to love me," she said. As it turned out, the reversal was not needed; doctors discovered Jessica was vitamin-deficient and were able to treat her with an intravenous drip.

Although the couple can more easily hug and cuddle now, their sex life has yet to catch up with their emotional closeness. Jessica said they're still feeling a little awkward about their new dimensions.

The couple already were overweight when they met at Microsoft six years ago. They began their relationship casually, then fell in love and married. About 14 months ago they made a pact to undergo the surgery together.

Although they knew there was a real chance they could die from the operation — one to two patients of every 200 do — they believed they faced greater health risks by remaining obese. Leo was suffering from sleep apnea, gallstones and high blood pressure, while Jessica was borderline diabetic. They had tried diets, drugs and exercise routines for years without success.

Even though the Looses have reached their target weights, their journey continues. The couple want to rid themselves of the folds of skin left behind after their fat melted away.

Jessica wants plastic surgery to lift her breasts and remove skin from her arms, thighs and abdomen — three operations costing $30,000 — while Leo wants the excess skin gone from his abdomen. The surgery should eliminate the infections that grow in their skin folds. Unlike their bypass operations, which were completely covered by Leo's health insurance at Microsoft, they can expect insurance to cover only a portion of the cost.

Last month, the couple visited Dr. Sepehr Egrari, a Bellevue plastic surgeon, who told Jessica the operations would remove about 15 pounds of skin. He joked that her abdomen would be so taut she could bounce a quarter off it.

"I've got to tell you, you are a little lady under all this," Egrari said.

But that's not how Jessica feels.

"Everything I experienced as a large person is still a part of me," she said later. "I'm having new experiences now like a new person. But I'll always have my inner fat girl."

Jessica carries a photo taken before the operation to remember that girl, and to show anyone who is interested. Sometimes she feels like grabbing strangers and saying, "If you only knew."

"Being that large, a lot of people will just avoid you and snub you in general. It doesn't happen as much now," Leo said. "I think it's a sad thing that hurts a lot of people. I would like to see a world in which everyone treats each other the same, regardless of sex, color, size or anything like that."

Leo was harshly reminded of his size two years ago when he took his nephew, then 11, to the Wild Waves & Enchanted Village amusement park in Federal Way. The two had climbed into the car on a roller coaster ride when Leo found he couldn't squeeze the safety bar over himself.

"I'm sitting there and I can't close it, so they make me get off the ride," Leo said. Everyone stared at him as he struggled to get up from his seat, he recalls. "It was kind of embarrassing."

So the Looses visited the Puyallup Fair last September to soothe the sting.

"Dude! My butt's lifting off the seat," said Jessica on one ride. "Mine too," said Leo. "Sweet!" replied Jessica. The couple stayed on their feet almost all day — unthinkable before. For lunch they shared a Krusty Pup hot dog, then they snacked later on an ear of corn.

They know they must stay vigilant about the amount they eat. Leo has added three or four pounds since early January, his first weight gain since the surgery. He thinks it may be due to increased muscle mass from exercising more. Still, it reminds them that bypass patients who ignore diet guidelines can gain some or even all their weight back.

These days the couple eat most things, just in supersmall sizes. For breakfast, they often split two scrambled eggs and an English muffin. They get hungry every few hours, so they eat about six times a day. And they must take vitamin supplements for life.

Those are small sacrifices compared to what they faced immediately after their twin operations at Overlake Hospital Medical Center in Bellevue. For three months, they had to eat pureed food. They each fought medical complications and had to return to the hospital. Leo had trouble focusing at work, and his performance slipped for a time.

They've conquered those battles. But they still have more to face.

Jessica hopes to quit smoking soon, despite unsuccessful past attempts. Egrari, the plastic surgeon, has explained to her that she needs to give up cigarettes for at least a month before her next operation. The reason: Smoking restricts good blood flow, which is needed for successful recovery.

The couple do get more exercise now. They moved last summer from Issaquah to a townhouse near downtown Redmond and can walk more for errands. They also sold their second car.

When Jessica and Leo moved, they brought with them dozens of figurines, plates and posters of James Dean and Marilyn Monroe, two sex symbols whose physiques aren't so extraordinarily different from their own any more. The couple's changing body sizes have led to unexpected reactions from strangers. Jessica said she got some dirty looks from other women when she visited a Lane Bryant store to help a friend pick out clothes. She thinks those shoppers were wondering what she was doing in a store for larger women.

When they were in San Diego, a waitress joked and flirted with Leo, the couple said.

"It boosts your self image and makes you feel good when people show an interest in you," Leo said. "It's not a negative thing. If people try to break us up or something, then I'm sure I would have a problem."

The couple plan to begin hiking this summer. Jessica, who once worked with Leo at Microsoft but who has been out of work for three years, has begun applying for jobs.

Looking back, the couple firmly believe surgery was the best choice for them despite the complications, both physical and emotional.

"I would do it again in a heartbeat," Jessica said. "I still think it's the best thing I have ever done."

But she warns others considering the procedure: "They should realize this is something they will be dealing with for the rest of their lives."

Jessica, she said, is less likely to accept poor treatment from others.

"The thing I have noticed most about Leo is that he is much more able to put forward his opinion," Lewis said.

"It's not such a one-sided relationship because he has more input. I think part of it is self-confidence and that he is more willing to take a risk."